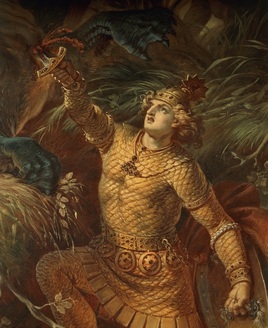 The Herculean figure grasped his foe’s arm and twisted it with great force ‘till the limb tore from it’s body. The foe’s scream of pain filled the halls. The figure nailed the foe’s severed arm to the mead hall rafters. The foe who committed various acts of violence, who re-enacted the idea of evil, fled the bloody scenery to die. The Herculean figure, also known as Beowulf, had a victory once again. His strength enabled him to avenge the peoples Grendel had viciously murdered and consumed.

Before he entered the great Hall to battle Grendel, the monster, he promised his King to fight without weapons, for his enemy didn’t possess any. Beowulf, as brave as a lion, said: 'I don't claim myself any lower in strength or brave deeds than Grendel. Therefore, I will not kill him with a sword, though I easily might. Though he is famous for strength, he knows no weapons to cut a shield. If he chooses to forego a sword, if he dares seek me without weapon, then we two shall fight without, and wise God, that king, shall choose who shall win glory" (Breedon 8). These absolute words manifests the bravery Beowulf holds. The fact that he, as honorable as he is, dares to fight his enemy fairly shows he’s mentally strong, brave and fearless. The fact that he dares to fight his enemy to save other people shows he’s humble and selfless.

If a hero wasn’t mentally strong, he’d easily succumb to external pressures. Therefore without physical and mental strength, a hero can’t be a hero. A hero must be brave, for without bravery, a hero wouldn’t be able to do great deeds. Fear would just stand in his way and keep him from doing the thing that’s morally right. Therefore, a hero shouldn’t just be brave, but also fearless. Fear is your worst enemy. Fear is like death and a true hero is not afraid of it. For without fear, you can sacrifice the one thing that’s most precious in life, and that’s life itself. And when someone is willing to do just that, and make the world a better place one step at a time, that to me.. is a hero.

Beowulf e.g. accepts the fact that he’s going to die and he knows that whenever his time comes, God has willed it that way, therefore he doesn’t question it. “Fate always goes as it will!” (Breedon 5). Something Beowulf mentioned and something he has lived by throughout his life.Therefore he was able to do the things he was remembered for.

Another thing a hero is remembered for, is the way he treats his people. A hero must have humility, because "to become truly great, one has to stand with the people, not above them” (Charles de Montesquieu). Also, a true hero saves people's lives, through the will of sacrificing his own. If a hero isn’t selfless, he wouldn’t care enough about others and be willing to put his own life at risk in order to protect them. The greatest heroes are remembered for the great and selfless acts they’ve performed.  Therefore, "without selfless service, no one ever receives the fruits of their rewards" (Sri Guru Granth Sahib).

Seeking revenge is one of the flaws many humans act upon. Revenge is an immoral reaction to an immoral action, usually resulting in pain, loss or death. “Revenge... is like a rolling stone, which, when a man hath forced up a hill, will return upon him with a greater violence, and break those bones whose sinews gave it motion” (Jeremy Taylor).  Even though heroes have a strong moral compass, Beowulf e.g. believes "it is better for a man to avenge his friend than to mourn too much" (Breedon 18). Therefore Beowulf, despite being a hero, shall always remain… human.

I subtly used imagery in the hook (or first paragraph), because I wanted to create an image for the readers with a memorable impression of Beowulf. Also, I described it as a gory scene, because I feel people get hooked better when it’s something shocking and violent.

In the second paragraph I described Beowulf  “as brave as a lion”. This is a simile and my intention was to show the readers the bravery Beowulf holds. Lions are considered brave, because they’re very strong, majestic creatures that are also on top of the food chain. And by comparing a lion to Beowulf who aren’t similar to each other besides the bravery they both hold, makes the image of Beowulf lucid.

I used another simile in the last paragraph. I used it because I wanted to describe revenge in a way that people could see it’s a bad thing. I found this quote online, because I couldn’t think of an interesting comparison myself and I found this quote quite valid. It’s true that revenge reflects upon your personality and by acting upon it can only mean that you’re a vindictive, unforgiving person. Revenge always comes back harder on the revenger. Yet, somehow all humans (and monsters) want to seek revenge whenever someone has wronged them. Have you ever heard someone say “sweet revenge”? Well, I think revenge is bitter, fruitless and the result are always inefficacious and I wanted to share that perspective with the readers using the simile.