“A timid encumbrance lacking steel in his backbone who would most likely have remained in paralysis, incapable of action, and let the Section go under” (Stieg Larsson 564)
The Girl Who Kicked the Hornets’ Nest - October 2009 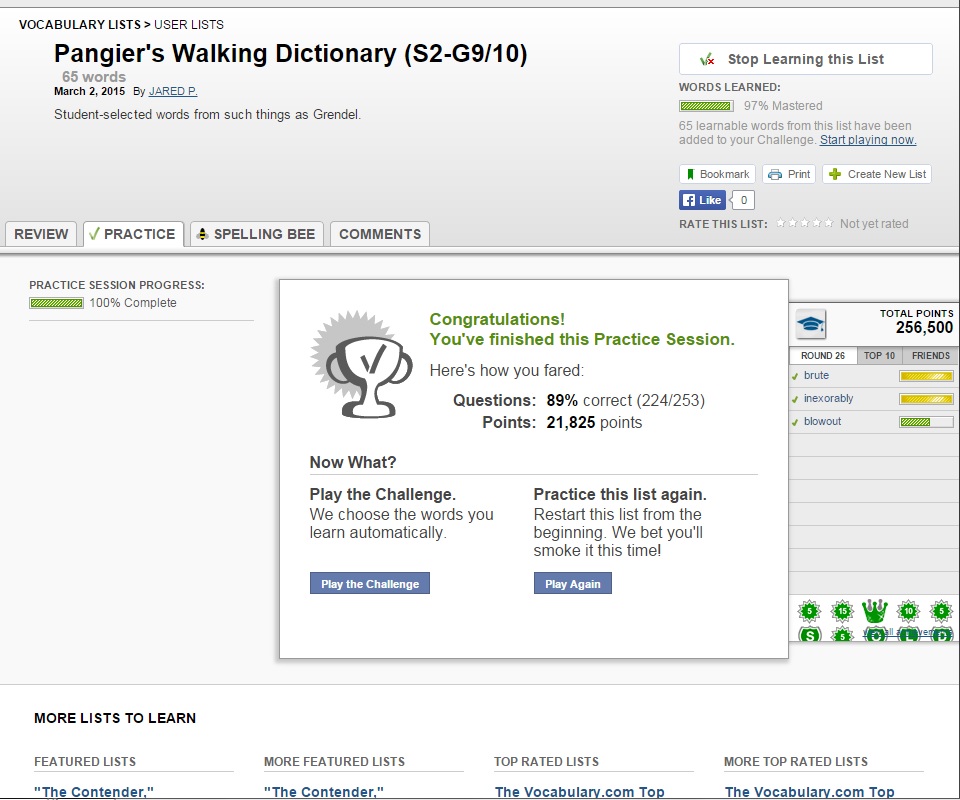 1) coercive
serving or intended to coerce
“Public force is the life and soul of every state: not merely army and police but prisons, judges, tax collectors, every conceivable trick of coercive repression” (Gardner 119).
The Isis leaders implement very ﻿coercive﻿ tactics in order to grab the world's attention.
John Gardner then puts Grendel in many encounters with humans where he would take coercive measures on them.

2) epitomize
embody the essential characteristics of or be a typical example of
“The nature of evil may be epitomized, therefore, in two simple but horrible and holy propositions: ‘Things fade’ and ‘Alternatives exclude’“ (Gardner 133).
Arnold Schwarzenegger epitomizes the virtue of manhood.
You, dear stranger, epitomize the virtue of kindness.

3) feeble
pathetically lacking in force or effectiveness
"He lives on, bitter, feebly challenging my midnight raids from time to time (three times this summer), crazy with shame that he alone is always spared, and furiously jealous of the dead" ( Gardner 90).
As we grow older, we grow more feeble.
That night I was feeling a little bit down for personal reasons, and such a feeble act has truly made my day complete.
I stood up like how a feeble, old woman would stand up, quivering and shaking.

4) gloat
dwell on with satisfaction
“Another one came at me, gloating in his blear eyed heroism, manically joyful because he had bragged that he would die for his king and he was doing it” (Gardner 81).
Lena gloated for she was the only one with an A after the teacher returned the assignment
After every slaughter, he gloats on the way back to his dark cave teeming with just as dark creatures.
My face ﻿gloated﻿ like I've just won gold at the Olympics.

5) literally
in a literal sense
“Because, he says, his site offers its members the possibility of living forever. Not literally, of course – that would be ridiculous (Forbes).
When my mom says she's going to burst, it literally means she's becoming very, very angry.
He literally bit the head off of one of Hrothgar's soldiers.
There’s no turning back. Literally. I mean, where else am I supposed to go?

6) menial
used of unskilled work (especially domestic work)
‘’So I have to choose something menial?’’ (Mahfouz 45).
Working in an icecream shop is considered menial work.
In the world we live in today, creating something original and new is not a menial job.

7) ominous
threatening or foreshadowing evil or tragic developments
"It was slightly ominous because of its strangeness- no wolf was so vicious to other wolves-but I half believed they weren’t serious” (Gardner 32).
The ominous sound that filled the rooms of the haunted house made the movie incredibly thrilling.
Gardner builds up these situations in a way that you know something ominous is going to happen.
My smirk then disappeared and got replaced with an ominous expression.

8) perplexity
trouble or confusion resulting from complexity
"Explored our far-flung underground world in an endless wargame of leaps onto nothing, ingenious twists into freedom or new perplexity, quick whispered plottings with invisible friends, wild cackles when vengeance was mine” (Gardner 15).
Perplexity struck me as I scanned the new page of mathematical equations.
Perplexity struck me as I tried to follow the incomprehensible words that were shared in your conversations.
I paused in perplexity.

9) petulant
easily irritated or annoyed
“'And by changing men’s minds he makes the best of it. Why not?' But it sounded petulant; and it wasn’t true, I knew" (Gardner 49).
My petulant brother yelled at me after I beat him at tennis once again.
John Gardner uses Grendel, anJohn Gardner uses Grendel, an unsightly and petulant monster, and his experiences to convey deeper messages that correlate with the purpose and sustainability of life.

10) pretension
the advancing of a claim
"His pretensions to uncommon glory were one thing" (Gardner 87).
He talked about his college acceptances without pretension.
“Miss me?” I said with a certain pretension in my voice.

11) sycophant
a person who tries to please someone in order to gain a personal advantage
“...the sobbing baby, the cold-eyed killer, the raging beast, the charming sycophant” (Gardner 4).
The girl lived her entire life as a sycophant, receiving gifts and what not just by being complimentary.
I’ve never seen this sycophantic behaviour before.

12) tormented
experiencing intense pain especially mental pain
"I listened, huddle in the darkness, tormented, mistrustful" (Gardner 47).
For years, he has been tormented by external social and internal pressures to be perfect.
Grendel is a very pessimistic creature who's tormented by his environment and experiences.

13) teeming
abundantly filled with especially living things
"Every sheep and goat had its wobbly twins, the forest was teeming,and the first crops of the hillsides were coming into fruit" (Gardner 33).
After her cat gave birth, her house was teeming with newly-born kittens.
After every slaughter, he gloats on the way back to his dark cave teeming with just as dark creatures.
I entered the gym teeming with dancing teenagers.

14) unsightly
unpleasant to look at
"For many months, unsightly monster you've murdered men as you pleased in Hrothgar’s hall........Prepare to fall, foul thing!"
(Gardner 83).
The slums were an unsightly introduction to my experience in Brazil.
John Gardner uses Grendel, an unsightly and petulant monster, and his experiences to convey deeper messages that correlate with the purpose and sustainability of life.

15) vaguely
in a vague way
“He panted for a long time, then rolled his eyes up, vaguely in my direction” (Grander 87).
Everyone looked confused whilst the teacher vaguely explained the assignment.
A huge flash of light blinded me and I could vaguely see what was inside.